Interview with the Translator (me!)

This interview originally appeared on Sarah McIntyre's blog, jabberworks.livejournal.com, where the illustrator of many children's books and comics interviewed my about translating Oliver and the Seawigs, a children's book by Philip Reeve and illustrations by McIntyre, into Dutch, into Olivier en de dwaaleilanden.

[Sarah:] Oxford University Press has been busy selling foreign rights to Oliver and the Seawigs so our book can come out in lots of different languages (Japanese, French, German, Turkish, American(!) and possibly a few more). I've had books published before in other languages, but usually I just get a copy of the book and that's all I ever hear about it. This is the first time I've had interaction with one of the foreign publishers - Dutch publisherVeltman Uitgevers - and they've been wonderfully enthusiastic! My first contact was with the translator, Sandra Hessels (@creativedifrnce on Twitter). Who also, very relevantly, just happens to be a mermaid:

Fortunately my illustrations translate very well into Dutch, but you don't usually hear much about the translator, and SO much about the Dutch reading experience will depend on her skill. Don't forget that page near the front with the tiny words on it... ah, there's Sandra! 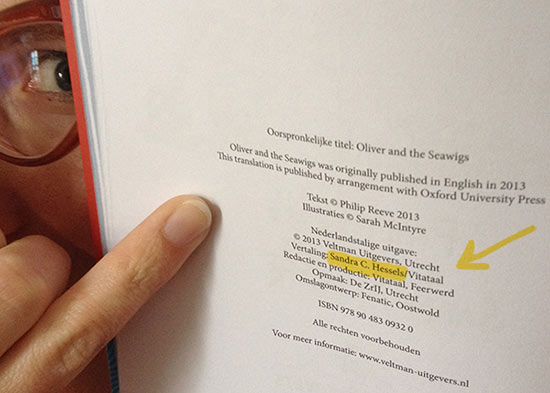 What were some of your favourite parts of translating Oliver and the Seawigs? Favourite words or phrases?
Well, Oliver and the Seawigs was my first title for a younger audience than the YA-novels I’m used to translating, so that in itself made it a lot of fun. It contains a lot of humour that needs some finesse. Also knowing that this would be the kind of book my kid would read in a few years’ time made it extra rewarding. I love having to come up with funny names, and I’m still quite proud of Dominique van Tastique for your very own Stacey de Lacey.

I think you already know the one bit that is my absolute favourite: “your boat’s gone all flop”. That made me laugh so hard – I could just see that deflated, sad little thing on the beach. (Sadly, my version, which came down to “your boat is all bleh” was edited into the equivalent of “flat”.)

I LOVE Dominique van Tastique! What were the most tricky bits to translate in the book?
I can’t exactly remember the specific words, but it’s always the ones that you hardly notice when just reading a book. A certain term that carries more meaning in English than a literal translation in Dutch would or that has several partial matches only and none are ‘quite right’. Specific jokes that almost certainly get lost in translation. Or those lovely typical words that you just know the meaning of (you can see it in its natural habitat and hear it speak), and still that one translation that feels right won’t pop up in your head until you’ve squirmed for half an hour. 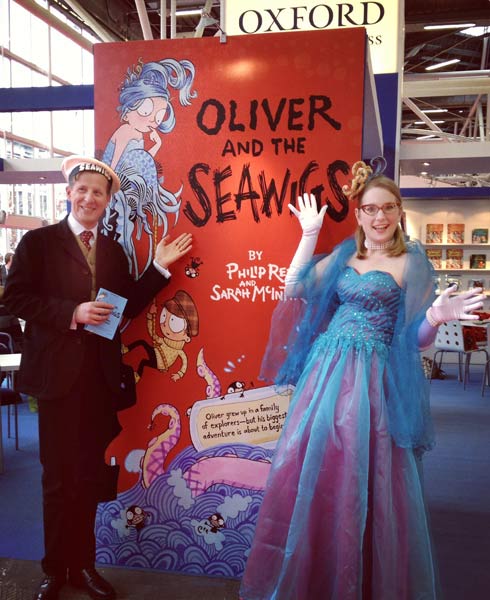 I also pondered over Thrumcap and Dimsey for quite a while. Wondering if there was a literal meaning or whether I should choose something that sounded alike or just something that had some meaning to Dutch readers. Did you know there is a Little Thrumcap in Nova Scotia and/or Maine? And that ‘thrum’ can refer to something that’s done rather monotonously but as a noun can be bits of rope? And cap could refer to the wig, of course, so you won’t know until you dig deeper. Or tweet (once the publisher says that’s okay).

You seem to get some creative license in renaming the characters. What are their new names and how did you choose them?
In this case, the publisher had already decided that Oliver Crisp would become Olivier Vlot (meaning both ‘quick’ (adj.) and ‘raft’ (noun)). Iris didn’t have to change. In all other cases, I read the book, make a list of names and offer as many suggestions as I can come up with, based either on etymology (whenever that’s actually applicable), sound/meaning (Culpeper was chosen for its fiery character, hence the ‘pepper’ survived) or humour (Stacey’s new last name), and usually a mix of these.

Then the agency I work with will go over these suggestions with the publisher and sometimes the original publisher to decide which one they like best (or come up with a different suggestion).

Some examples:
The Hallowed Shallows are ‘de Diepzinnige Ondiepte’ (the deep undeep, ‘deep’ having a double meaning, so to speak)
Mr Culpeper is ‘meneer van Peperstraten’ (Pepperstreet, if you want it literally, but this is a common enough surname)
Thrumcap is ‘Tessel’ (which is how you pronounce Texel, our own biggest island)
Dimsey is ‘Dimsie’ (sounds exactly the same as the English name)
Thurlstone is ‘Dondersteen’ (a double meaning – thunder stone / rascal)
St Porrocks is ‘St Juttemis’ (our version of the day pigs can fly) 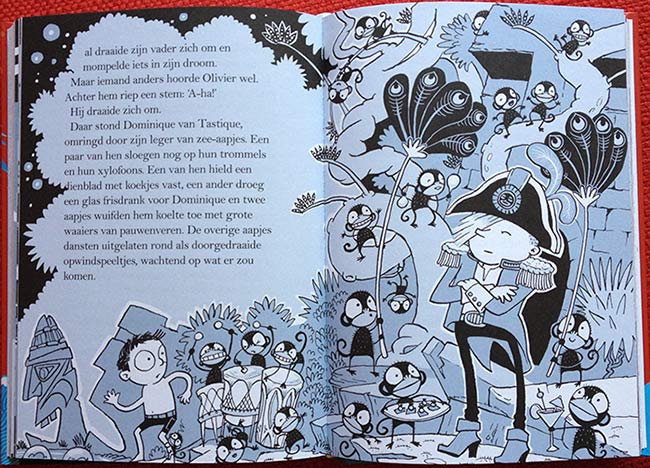 What's your first language, and how many languages do you speak?
I’m a native Dutch speaker and a near-native English speaker (thanks to a love for the language, reading, university and of course television, haha). At my grammar school I also took German, French, Latin and Greek. Yup. Did a course in Irish once at university, too, since I get to brag. But my German has ebbed away (in spite of being fifty per cent Austrian, but that’s a dialect and so not the same) and my French is more than rusty. The others were never more than passive to begin with.

I'd say that's pretty impressive, all the same! Other than Oliver and the Seawigs, what's the most fun or exciting thing you've ever translated?
This is where the gushing starts: I love my job and I’ve been extremely fortunate to absolutely love almost all of the books I’ve done so far. I started by translating pockets in the Charmed-series (those three sister witches from the telly, a show that I really loved!), so those will always be special. I love certain innovative and cleverly written Young Adult novels (the Mara Dyer series, for instance) I get to work on.
And fairly recently, I’ve been given Oliver and now also two other comic translations (from two dear colleagues of yours: Monster and Chips by David O'Connell and John Dougherty's Stinkbomb & Ketchup-Face) that are just so very different from what I’ve done before. They have a wholly different style and sense of humour, for a different audience, which makes them almost an entirely different ballgame that’s exciting and fun in its very own ways. Especially since I know I’ll read these to my son as soon as he is old enough. 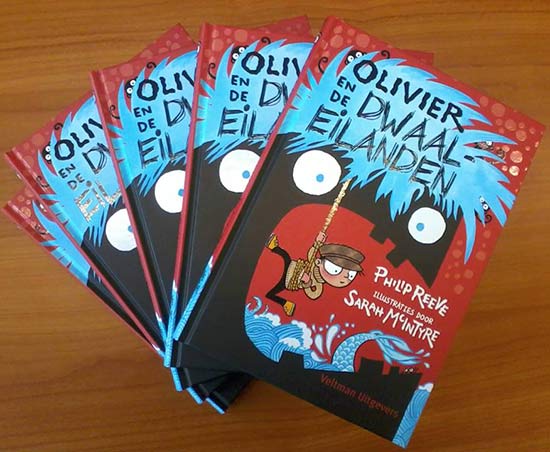 What's a standard working day like for you? Do you have a standard working day?
It’s standard in that I work whenever my son is asleep – so I’m completely at his mercy (he’s two and a half now). I started translating as a freelancer in 2012, after quitting my then day job at a magazine publisher’s so that I could work from home and be with my son, which is absolutely a great combination. A bit of a time crunch now and then, but I wouldn’t have it any other way.

Do you have an interesting top tip or two for other people who are thinking of going into translation as a profession?
Read, read, read. In the language you want to translate from and into. Get a relevant education – I studied English, not translation – and background (work experience), even if that means starting out just translating a friend’s website or a brochure for a merchant down the street.