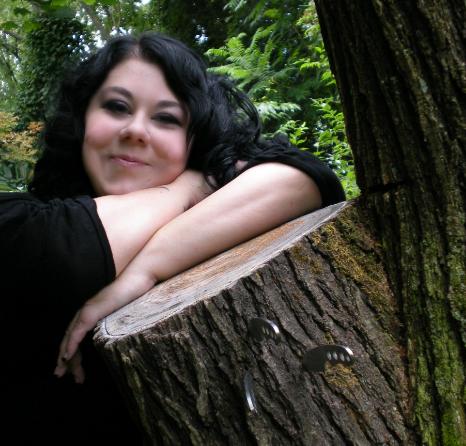 Hi Jessica, thanks for doing a Q&A with me as part of your blog tour for Sacrifice, your second Sin Collectors novel! First question: are you a vampire? (Okay, that only makes sense if you've seen her author bio.) But do tell us a little bit about yourself!
Thank you for having me! As for my mortality, I like to keep people guessing.

You've published The Sin Collector last year, novel one of the series, followed by the novella Thomas. Is that an extra or a must-read in order to understand Sacrifice?
You could probably get away with skipping Thomas, however I wouldn’t recommend it. The novella includes more detail into the rites of Sin Collectors as well as hinting at many of the aspects of Sacrifice. In addition, you first meet Emmilina, one of the new main characters in Sacrifice!

How did the idea of sin collectors come to you?
When I’m not writing, I’m reading. My genre of choice has always been religious non-fiction. The myth of Sin-Eaters exists in many cultures and I fell in love with the idea of someone whose sole purpose was to take this huge burden, a lifetime of sin, off your chest. Would everyone deserve it? Some sins seem too unforgivable to be taken, etc.

Why are sin collectors such a lonely breed?
Well in my books, Collectors literally couldn’t be around one another. The weight of the sins they carried ricocheted off one another and it was physically painful for them. Since the Mark of Protection, Collectors can now be together in ways that before would have been impossible. However, how do you go from living a completely solitary life, to being a part of a community? It would be jarring and I think my main character struggles with that most in Book 1, but less in Book 2.

Do they 'absolve' every human before they die (and if so, is that fair)?
All I’ll say is that Collectors are taught to collect every sin from a human that seeks them out. Whether or not they choose to follow that rule, is up to each Collector. The idea of what is forgivable, and the right to forgive at all is a huge theme in Book 1. This grey area of morality and salvation fuels the fire of the antagonists, The Castus, in the series.

How many instalments do you have planned for the series?
Currently the novels are a trilogy, so one more novel. However, there may be one or two novellas in between. There are a few characters I would love to expand on, but their life stories just don’t fit into the novels well. People seemed to adore Thomas, and that is why his story was shared first.

How did you come up with the beautiful and mysterious symbols?
I love symbology. I usually begin by listing what I want each overall symbol to represent. For the Collectors it was protection. I then sought out symbols from many different cultures and religions that represent that. The Castus Crest is more of a mark of unity, and you will find out more about that during my blog tour for Sacrifice!

Do you have much in common with your heroine, Liliana?
I think I have her sense of sarcasm for sure. I doubt I’d be able to write a main character without it. I think I resemble the Liliana in Sacrifice more than The Sin Collector. I wanted her character to begin very juvenile in the sense that interaction with people is what makes a person grow. She was very emotionally stunted in Book 1. I’d like to think in Sacrifice she has blossomed, and grown up. I think when you have people to fight for, that can’t be helped.

How much do you plan your novels (or even the entire series) ahead?
I have a general outline for all the novels. I am a lot more flexible when it comes to the novellas. I have the characters outlined, their ages, their stories, etc.

Are you a full-time writer?
Yep, all day every day.

Did you grow up with books, fairy tales, stories? Which were your favourite childhood books?
My Grandma was a huge reader and instilled that in me from as early as I can remember. I was always a sucker for fairytales, The Secret Garden, Little Women. I enjoyed books with strong female leads. I discovered Patricia Cornwell books when I was eleven and couldn’t get enough of them.

Who/what are your favourite villains?
My favourite villains are the unexpected ones. The ones with motives you can’t quite figure out at first. It drives me nuts when the villain is presented to the reader tied in a neat little bow. For example in The Hunger Games, Snow is the villain. He wants to be in charge. Katniss rebels, and messes that up for him. There was no hidden agenda, just the struggle for power. I prefer my villains more devious and deep.

Would you ever want to be immortal?
I think it would depend on the circumstances. If I just lived forever like this, probably not. If I was, say, a vampire with healing ability, tremendous speed and compulsion powers, sign me up!

When did you know you wanted to be a writer?
From as early as I can remember. My Grandma would buy me composition notebooks and when I’d fill them up she would critique my work. It was something I always enjoyed doing.

Where do you stand on 'Write What You Know'?
I think you can’t help but write what you know. Perhaps you shouldn’t write a memoir of your life. However, I think your standards and beliefs shine through anything you write. If you’ve known loss, sacrifice, fear, you are going to be able to convey those emotions a million times better if you’ve struggled with them in real life.

You chose to self-publish, right? Did you submit your manuscript to agents or publishers or just decide to go the self-pub route right away?
I did submit to agents and publishers. In more than one instance, it was suggested to me that I change my characters to vampires since that is a “sustainable market” right now. First, that would have never worked with the story and secondly, I refuse to change my entire series because I’m not doing what everyone else is doing. Maybe that choice forced me to have less success, but I’m ok with that right now. Maybe in fifteen years Sin-Eaters will be the hot new Supe!

Have you ever had a case of writerly self-doubt?
Only when I’m awake.

What do you say to the others out there who just want to write, get their story out and who might be a bit overwhelmed by it all?
I would tell them to always try, because if you don’t try you will have failed by default. If your story is considered unfamiliar, work hard to make it familiar. More than anything, if you intend to self-publish network your butt off! Not only will you find support from other Indie Authors, but also they are generally fantastic people with the freshest ideas.

Writing is often considered a rather lonely profession. How important would you say it is to have beta readers, editors and a team around you?
When I released The Sin Collector, I was a total noob [newbie, ed.]. I had no idea what I was doing at all. Networking is vital. You need Beta readers, editors, and other authors around. I’ve found that people who don’t write don’t understand the sense of urgency a writer can feel. The anxiety for their characters, the frenzy that comes with finding flow seems ridiculous to most people. I love that I can lean on other authors who completely understand that I haven’t showered or eaten in 36 hours because, damnit, I found a groove!

When do you know you're ready to send your manuscript to others for a read-through?
When the story feels whole. Of course, through editing you will nitpick and add things, but the foundation of the story is set. It’s a great and terrifying feeling!

A few to lighten the mood:
Halloween or Christmas? Anyone who has seen me online knows it’s Halloween all the way baby!
Snape or Gollum? Snape
Charmed or Hocus Pocus? Hocus Pocus
Sin Collector or vampire? Vampires seem to have less responsibility!
A good book or a good tv show? I am addicted to both, I can’t choose!
Nsync or BSB? Neither? Although in fairness, NSYNC did have a great Christmas album!